With all of the various devices that we have in our lives these days, there are rarely enough outlets or plugs available to keep everything topped up. A desk charger can help bring a number of USB cables to within easy reach and just helps remind you to plug in, but they tend to be chunky rectangular boxes that you don’t necessarily want to plop down on your desk. The RapidX X4 looks to address exactly this problem with a 4-port charger in a super slim package.

I spent a few days with the RapidX X4 to see how I liked the look of it on my desk and whether it could handle charging my menagerie of devices. 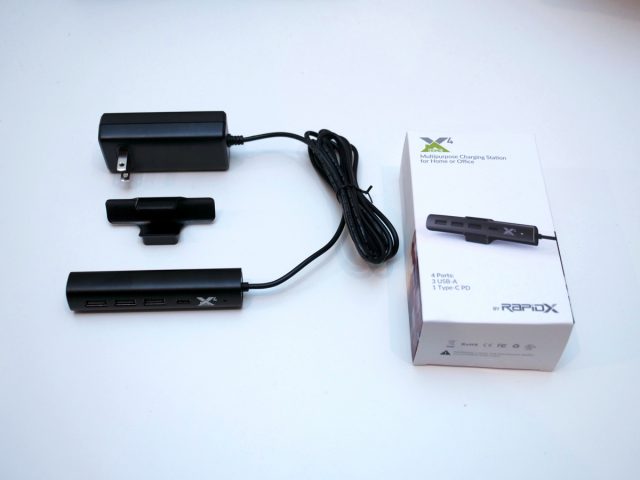 There’s a lot to like about the RapidX X4. The charger gives you 4 ports in a sleek and compact package that should fit well in any office or home.

The size is perhaps its biggest asset, it’s 4-inches long by 0.87-inches wide and deep — a tiny footprint for something that can charge up to 4 devices at once. Thankfully the tiny stand that attaches to the charger has an adhesive bottom that did a great job of keeping the charger secure even when plugging and unplugging USB cables. The original adhesive held up fine through the few transfers that I subjected it to and they conveniently include a second adhesive strip in the box if the first one wears out.

The charger also looks great on your desk, the simple X4 branding isn’t too in your face and it is otherwise extremely nondescript. It’s a matte black (there’s a white option as well) and while the stand is glossy plastic, that is virtually invisible from the front of the charger.

The RapidX X4 charger delivers enough power to trigger rapid charging on my Pixel 2 XL, 18W via the USB-Type C port and 2.4A max from each USB-Type A ports with a total of 3A if all three of the Type A ports are in use simultaneously. It makes it an excellent charger for tackling your phone, tablet, and a couple of accessories all at the same time. 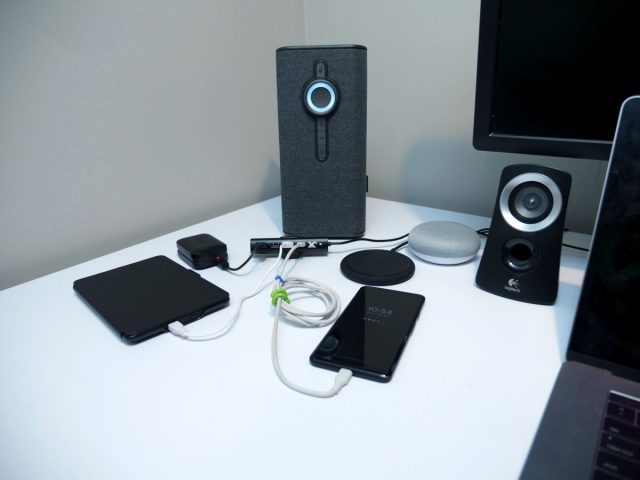 The RapidX X4 charger doesn’t provide enough juice for some larger devices to charge effectively. My Lenovo Chromebook, for example, flagged it as “low power” charging which means it will basically only charge if the laptop isn’t in use. My Nintendo Switch refused to charge at all, while my Shield Tablet and iPad Air 2 charged as normal.

The RapidX X4’s power brick is shorter than the charger itself, but it is roughly twice as thick and twice as wide. I mention this only to eliminate the idea of using this as a travel charger, along with the 6-foot power cord (something that is welcome when reaching for a home or office outlet) this is simply too big a package to justify. Also, the cord isn’t detachable from either the charger or the plug, further limiting its use as a travel charger and its repairability if the cable goes out sometime down the road.

The $39.99 retail price feels a little steep (you can find it for $35 on Amazon) given the number of $15-25 chargers out there, but when comparing it to most those options, the RapidX X4 charger is better looking and stays in place (unlike most of the competition).

If you are looking for a charger to keep your phone, tablet, and other accessories topped up through the course of the day while maintaining a clean and minimal desktop, the RapidX X4 is a solid option. There are cheaper options out there that offer comparable charging specs and ports, but you’ll have a hard time finding one that looks as good as the RapidX X4 does on your desk.